This is Mexican food for the type A personality, made to order before the customer with their inspection and dictation.

on a Sunday in a place where the weather doesn’t stray too far from perfect year round. Viewed from the sidewalk of a suburban side street, a sign with green and red letters reads El Toro Bravo Mexican Food. The building is unremarkable. Ten people line up to order. Ordering to-go is commonplace, so there are plenty of open tables.

A red awning covers the front of the dining area. On a silver steel appliance, a sticker reads ‘Don’t Trash Beaches’. A kid with dreadlocks and flip flops juggles his plate full of tacos with a skateboard in one hand. Five out of six large flat screens display a static menu, while a Spanish-commentated Juventus vs.

Milano futbol match plays on the sixth. For such an efficiently organized assortment of food, the menu itself is misleadingly complex. They do the familiar dishes – tacos, burritos, quesadillas, nachos, tamales, empanadas. Rather than squinting at the menu screens, ingredients may be readily inspected by peeking through the sneeze guard. This is Mexican food for the type A personality – made to order with artisan like craftsmanship. 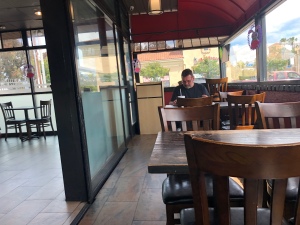 Carrying a huge tray from the back, a chef unloads tongfulls of steaming slow cooked meat into the food display. Anchored by familiar crowd pleasers like al pastor, pollo and carne asada, the restaurant’s real chef d’oeuvre is carnitas (which I’ve devoured on previous occasions). The nonchalant casualness and proximity my friend’s house assumes repeat visits, so I’m empowered to experience the asada.

After placing a few pieces on the counter and slamming a butcher knife 5-10 times, a small mountain of fluffy chopped meat remains. For those with a large appetite, portion size is a distinct selling point.

After spreading refried beans on the open faced tortilla and adding a few scoops of rice, the chef  piles on the slow roasted asada. Desiring a traditional combination, I dodge the guac and sour cream, selecting pico de gallo, parmesan, cilantro, onions, lettuce, and salsa picante. The tortilla maintains its elasticity as the chef rolls the splayed out contents. His technique embodies a practiced muscle memory that produces a well wrapped Nalgene bottle sized finished product – toasted and warmly nestled in a blanket of foil. Hungry and overly ambitious, we order nachos as well.

We take a seat at a high top table and I smile at the silver bullion atop the crumpled paper plate. I peel away the foil revealing a crisply toasted tortilla – flaky golden dough is malleable enough that it somehow maintains its strength as I dig in.

It isn’t until the second and third bites that my expectations are exceeded,

as either edge of a burrito tends to contain extra tortilla. The bulging burrito is wide enough to resemble a bowl. I sample a fork full of ingredients from the squishy cylinder. The flavor itself blends a charred smoke with saucy marinade. To avoid inhaling my food at a stomach condemning pace, I set it on the paper plate, standing upright, and sip a plastic cup of water.

Salsa splattering onto shirt fronts, we finish up as a young couple sheepishly walks in. She’s donning flannels

and vans, he’s in a flat brimmed five-panel hat and beige new balances. The woman at the register greets him like a close relative – maybe a nephew – and hands him a Pacifico beer. They walk to the back of the line and a chef walks around to greet them with a smile and Spanish exchanges. Clearly regulars, the couple knows what to expect at El Toro Bravo – nothing short of the finest burrito known to man.

There’s a million and one places to find great mexican food in this world. Somehow, El Toro Bravo has distinguished itself beyond the common taco shack; I’m still trying to pinpoint what exactly seduces me to return time and again.